06.06.2022: Penalty can’t be imposed without giving the opportunity of hearing to the taxpayer: Andhra Pradesh High Court 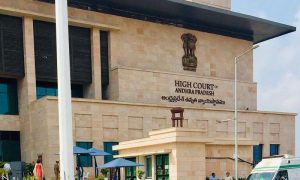 The Andhra Pradesh High Court in the case of S.P.Y Agro Industries Limited vs Union of India vide Writ Petition No. 256 of 2022 dated 05.05.2022, has ruled that the GST penalty cannot be imposed without giving the taxpayer an opportunity of hearing.

The division bench has observed that any rectification under Section 161 of the CGST Act, which adversely affects any person, is possible only after following the principles of natural justice.

In this case the petitioner is in the business of manufacturing grain-based extra neutral alcohol and also bottling Indian-made foreign liquor. It is also registered under the Central Goods and Services Tax Act, 2017. The department/respondent issued a letter on Form GSTR-3A under Section 46 of the CGST Act on the ground that the petitioner failed to submit its returns on GSTR-3B for the months of January, 2020 to June, 2020 and, as such, , the petitioner was directed to file fresh returns within 15 days.

In view of the non-response on the part of the petitioner in furnishing returns, an assessment order was passed determining the liability towards CGST and Andhra Pradesh GST (APGST). A sum of Rs. 3,36,798 as cess was made payable by the petitioner for the tax period from January, 2020 to June, 2020. The petitioner was also directed to pay an amount towards interest for belated submission of the returns.

The order was passed in the exercise of power conferred under Section 62 of the CGST Act, 2017, which provides a procedure for framing assessments on non-filers of returns. The same authority, in the exercise of its power under Rule 100(1) of the CGST and SGST Rules, 2017 read with Section 62(1) of the two GST Acts, enlarged the order with certain additional liabilities by styling the order as Corrigendum-cum-Addendum.

The Corrigendum-cum-Addendum directed the petitioner to pay a penalty of Rs.18,51,772 under IGST and Rs.13,93,966 each under the CGST and APGST Acts apart from cess. This communication determining the penalty payable comes to be made for the first time in terms of Section 122(2)(a) of the CGST Act.

The respondent issued another communication, titling it as a rectification order under Section 161 of the CGST Act in order to ratify the corrigendum-cum-addendum, by which additions were inserted to the original order of assessment. The rectification order being the latest one, having imbibed the earlier two orders, was appealed in the prescribed form under Section 107 of the CGST Act.

The department contended that the matter may have to be remanded for fresh consideration in accordance with the law. There is no bar to imposing penalties under Sections 62 and 122 of the CGST Act. The entire action came to be initiated as the petitioner failed to pay its periodical GSTR-3B returns within the prescribed due date.

Further, the provision of the Section 161 of the Act provides that any rectification which adversely affects any person is possible only after following the principles of natural justice. Since the order impugned substantially affects the assessee as a penalty is sought to be imposed, which demand did not form part of the notice dated 13.08.2020, without giving an opportunity of hearing, the orders under challenge are set aside. The respondents are permitted to proceed further by issuing a fresh notice and passing orders in accordance with law,” the court added.